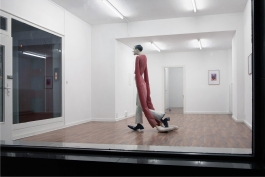 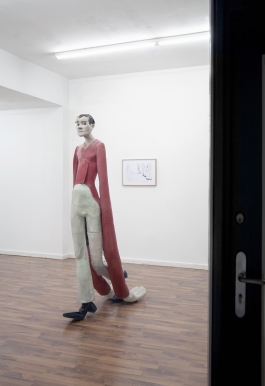 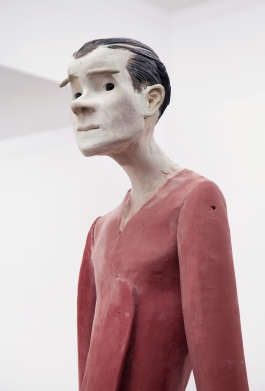 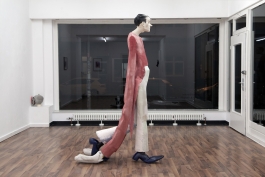 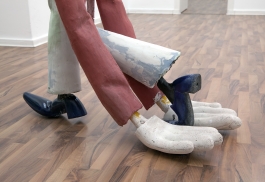 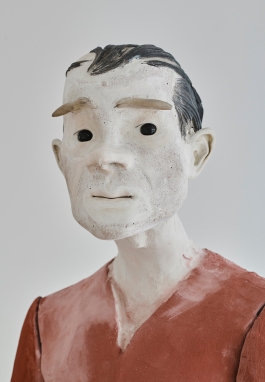 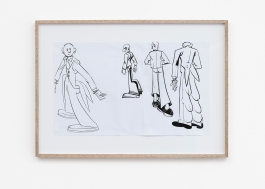 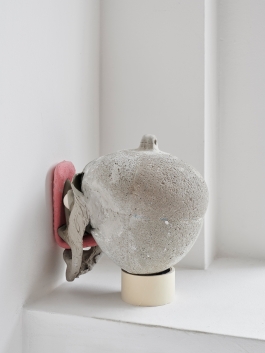 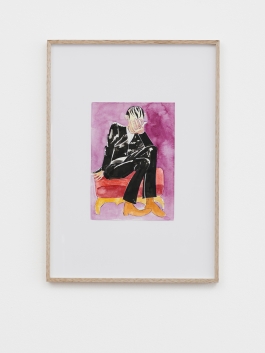 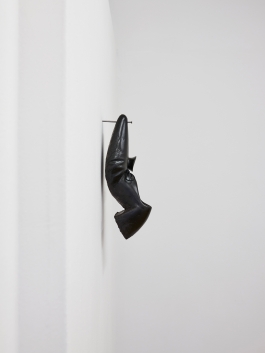 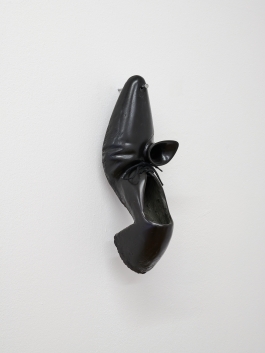 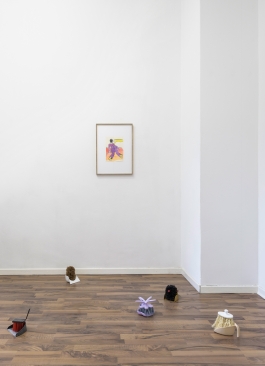 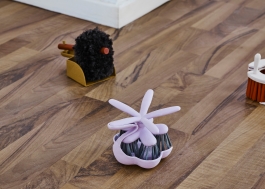 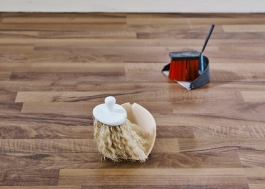 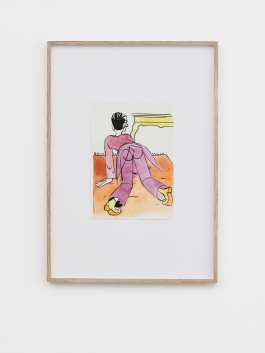 Did not k. marx once – perhaps when he was still a young lad – speculate on how things might have been before alienation had come into the world?
I might be wrong, but I think he said that in those days, not only was man not yet alienated from his labour/toil, but also the serf was not alienated from his Lord (note: he (k.marx) did not want this absence of alienation to be understood as some sort of supralapsarian "golden age").
Anyhow: in those olden days, the serf encountered power exclusively in the corporal form of his Lord, who was not a structure, but a very concrete person to whom he (the serf) could have a relationship to, very much the way we today have a relationship to a person we, for example, love.
And in such fashion, the servant we made up loves his Lord.
But he should probably knock it off, 'cause feudal days are over. And not only does the Lord not love the servant back; the way the servant feels for him is making the Lord increasingly uncomfortable...

All of this could certainly be expressed more in a more complicated manner and in many more words, and this is how it shall be done in the following, yet it shall be stated here, at this point, that, when it comes down to it, this is how it is, and everything else leads always back to this.

So, one could leave it at that, because everything important has already been said.

Yet, since to stop speaking would mean that one would have to take action, and as we do not know what would even constitute action, and yet, at the same time, are already scared of this unknown action, we will proceed to speak for the time being.

The servant lives in the walls of his Master's house, or rather; contained within his Master's house is another, much humbler house wherein the servant dwells, and which he cannot truly call his own (as it is merely a fief granted to him by the Master and, as such, can be taken from him if, e.g., he fails to fulfill his duties, or if his Master is bankrupted, either through his own doings, or through providence), and which is plastered and smeared into the various corners, clefts and crevices of the Mansion. These places tend to be overlooked, but nonetheless have to be scrubbed and rinsed just as neatly as the surfaces and the rest of the house.
Within his Master's house, the servant himself is like some kind of smut or fungus, and the Master lets him feel this from time to time. Of course, there also has to be the occasional kind word for the servant, so his little servant-heart can grow back each time just to be torn out again.

Mathematically speaking, everything in the house exists two times (though this isn't completely accurate), e.g.. there is a good set of stairs for the Master and a dingy, narrow staircase for the servant, and there is a nice living room for the Master and a salon for the Master and his various acquaintances and relatives and relations, and there is a Master bedroom for the Master and the Mistress, who furthermore shall not be mentioned again for obvious reasons. It is best to completely avoid thinking about those things, although they are indeed hard to ignore, especially when considering that there are children in the house, and those children have rooms of their own, resp. rooms built especially for them, and thus, those children must come from somewhere, because otherwise, their rooms wouldn't be there; but actually, the children's rooms have been there long before the children came along, and so perhaps the Master-bedroom has produced the children's rooms, and the children's rooms in turn have spawned the children (factually untrue) to give themselves a purpose, and in a similar vain, there is squalid little chamber wherein the servant can stand around and collect dust (in this specific instance a metaphor for not moving) when there is no use for him and he couldn't find a way to make himself useful.

Forgive me, Oh Lord! Rightfully you have scorned me, most rightfully you were standing there and yelled at me:

You rat
you pest
you fluke
you mold, you

open-arsed medlar, you
scum you filth, you thing
you smut

Much I cried, but only because you were so much in the right, both with what you said and how you said it. Do I not live in your house like vermin, like a rat in its hole, don't I infest the house like a mold, and aren't I even lesser than the dust that I put in the dust pan, because doesn't that very dust originate from you, isn't it your dust, and I originate from nowhere, and I am not yours.

Oh, if I absolutely must be so parasitical, at least let me be a gall on a proud oak tree. Then, you could take me and crush me and make an ink out of me, and with this ink you could sign your name...

Every time something breaks around the house, e.g.. when another one of the cups is smashed into pieces, the servant is much more affected by it than the Master is, even though the Master is the actual de jure owner of the cup. But the Master has delegated his care-duties to the servant, who therefore has become the foster- or de facto owner. He loves the cup infinitely more than the Master, because he has been involved with it and cared for it, and so he almost can't bare the sight of the two halves of the broken cup, lying there on the carpet.

Once again one of the delicate cups has been knocked of the table (there is nobody to be blamed), and now, to clean up the remains of the cup, he (the servant) has to get the combination dust-pan and broom. In the rural south, where the servant hails from, this combination is affectionately called Besala und Schäufala; here in the city, the combination has no proper name, much less an affectionate one.

The servant has a special set of Besala und Schäufala reserved just for sad duties like this, with a dust-pan made from ebony and a freshly cut Thuja twig for a broom.
But instead of throwing the broken pieces into the dust bin (as he ought to), he secretly lays them out in his small chamber under the roof. One by one, the other cups, the little milk jug and the stately, bulbous teapot will bid farewell to the fallen one. The old teapot is wearing her black tea cosy, the same she has been wearing ever since the coffeepot fell down many years ago.
Having had so many of her cups taken from her, she acts collected and calm. Only when she notices how fragile the cup's little handle is, a large, single drop forms at her spout.
The little milk jug tries hard to appear cold and untouched but – of course – instantly looses it and has to be consoled and carried away by his older sister, the sugar lump.

After that, they all have to get back to their duty, as it's time for the afternoon tea.

The servant tries hard to conceal these ceremonies from the Master's eyes, but he nonetheless has caught on to him, and they are cause for great concern about the servant's mental state.

It's all so incredibly hard to contemplate, and to speak of it is absolutely out of the question. To whom would it be addressed, anyway? Either way, it would be grossly inappropriate, and the servant himself would be uncomfortable to talk about whatever it is, so imagine how some complete stranger would feel about being dragged into this, wrongfully dragged into someone's emotional insides, an emotional world that the one having it oughta be ashamed of.
The man-servant culpable for creating this emotional microcosm lives within the servant, as the servant himself lives within his Master's house, hiding inside of the cracks and tiny spaces that are so awfully hard to clean.

The Master calls upon the servant, as he is currently enjoying a particularly witty passage in his beloved Lichtenberg, and he wishes the servant to share his enjoyment.
G.C. Lichtenberg muses that it would be splendid if only there was some sort of catechism or study plan through which the third estate could be transformed into some sort of beaver.
The servant doesn't understand what the story (or is it rather a parable?) is supposed to mean.
The Master continues: he (Lichtenberg) could not name a better animal on God's earth than the beaver: he only bites if captured, he works hard, is both fervently matrimonial and a skilled tradesman, and also has formidable fur.
Especially the line about the fur: hilarious.

The servant adjusts the long strands of dry hair that he has combed from the back of his head all the way into his face, trying to cover up his bald dome.

Should he be transformed into a beaver, too? Growing up in the countryside, the servant remembers the beaver mostly as a pest, a nuisance who's feverish and aimless activity constantly interferes with the human's serious and important projects, e.g. when their damns flood the fields, or when the beaver cuts down trees for no good reason that the humans had already made plans for, and that they would have put to many good uses, like building a desk or a spinning wheel.
The servant doesn't want to be a pest or a nuisance, but a productive and useful part of something bigger, a tiny unit that only exists in relation to a bigger one (the Master). Sadly, man has become beaver to man (homo homini castor), the servant bemoans.

He keeps all of this to himself, instead muttering: how witty indeed, what a poignant thought that wise man from Göttingen had. Only one thing: who is this third estate that he mentions?
The Master explains: the third estate is comprised of all those who are neither part of the first (clerics) nor the second (aristocrats) estate. The regular, hard working, honest people – us, the Master says to his servant.

The servant has a whole arsenal of Besala und Schäufala at his disposal, much more than he would reasonably need to carry out his work (really, just one pair of them would suffice). They are meticulously cleaned and put back in their assigned place after every use, as they themselves are also part of the household.
Together with the teacups, they form the fourth estate (the object-class), which is placed beneath the servant in the hierarchy and to whom the servant is a benevolent and caring master. He aims to rule in the very fashion he wants the Master to rule over him.
Sometimes though he finds it hard to be a just ruler and avoid any favoritism, because he does love the Besala und Schäufala more than f.e. the teacups or the dustbin, and love often reveals itself the most when one tries to suppress it.

The Besala exists in relation to the Schäufala, and with one the other would be incomplete and without purpose. To whom should the little broom deliver its harvest of dust, if there were no pan, and without the little broom, the pan would remain forever empty and unfulfilled.