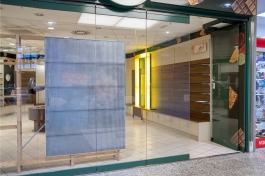 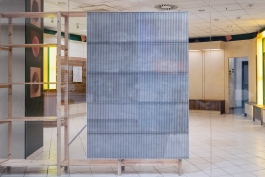 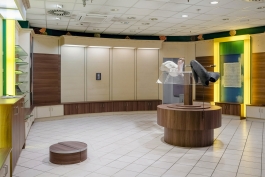 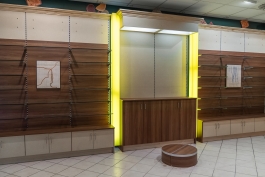 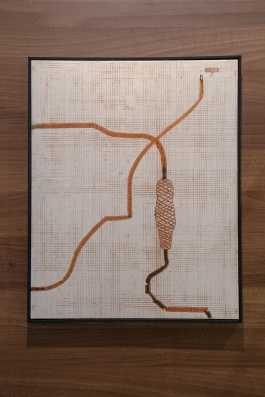 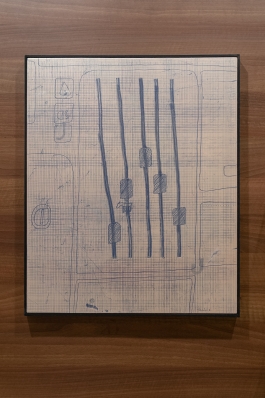 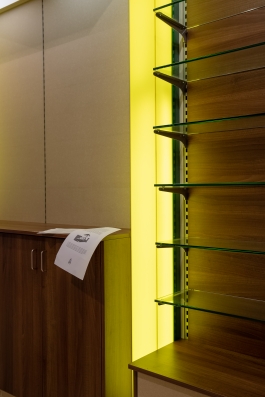 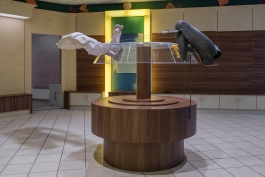 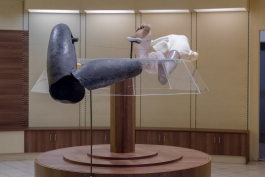 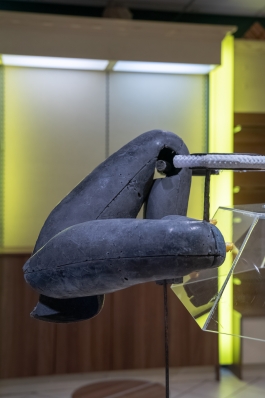 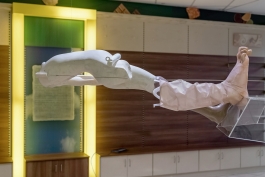 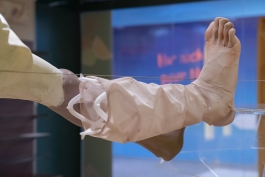 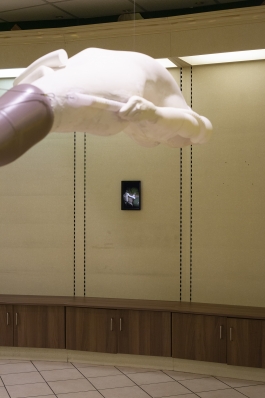 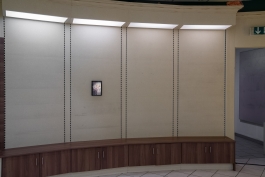 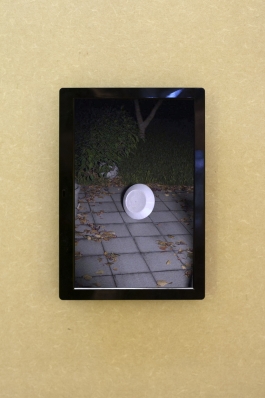 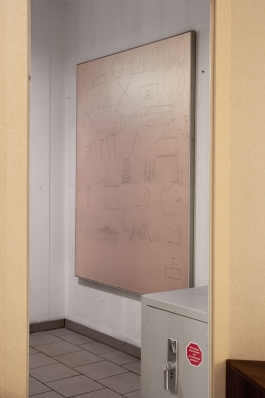 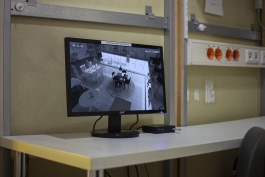 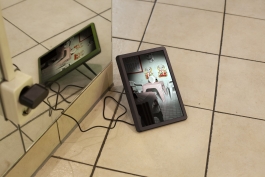 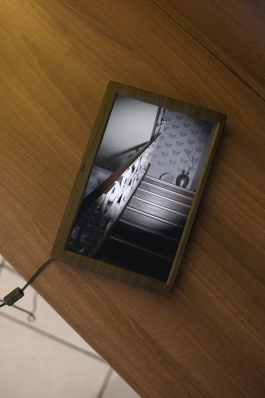 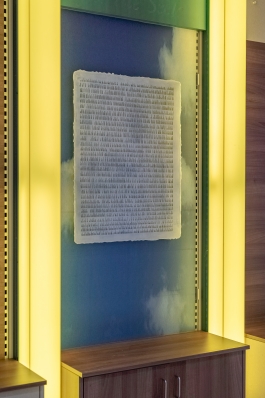 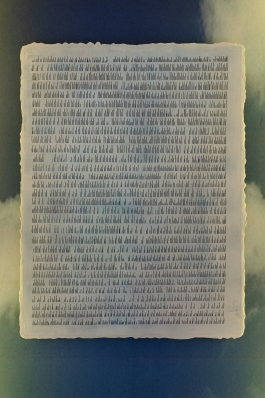 A FAMILY RETURNS FROM THEIR SUMMER VACATION

WHILE THEY WHERE GONE, THE GARDEN HAS BECOME OVERGROWN

BEFORE GOING TO BED, THEY WATCH TV

After the evening news, they watch a documentary titled “Eichinger in Hollywood”, which attempts to give the german viewers some understanding of the work of a movie producer.

We see the famous german movie producer Bernd Eichinger in his L.A. residence. Eichinger is wearing tennis shoes and denim jeans with a blue sports coat. He is leaning against the counter that separates the open kitchen from the spacious living room, conducting an important phone call while drinking fresh orange juice and smoking a cigarette.

Dieter Wieland, who has been cast as the narrator of the doc based on his years studying architecture under Richard Neutra, and who has accepted this job only because of a massive budget overrun during the renovation of his farm house in upper bavaria, recounts Eichinger's biggest successes so far:

Eichinger's lady friend Sabine Eichinger (no relation) hands Eichinger a black ceramic coffee cup. Eichinger nods appreciatively into her direction but continues the phone conversation. At the other end of the line is director Helmut Dietl, Eichinger's old friend from Munich days and now, too, based in L.A. Eichinger and Dietl loosely agree to a meeting in the afternoon. Eichinger puts the cigarette out and lays the cordless phone down on the counter.

At the wheel of his Mercedes-Benz S-Class, Eichinger reflects on the differences in mentality between Germany and the U.S.

Eichinger enters the office of his production company Neue Constantin, closely followed by the film crew. The blinds are half-drawn and mounted on the wood-paneled walls is the theatrical poster for Voll Normal starring Tom Gerhardt. Eichinger chit-chats with his jerry-curled american secretary who speaks imperfect german with almost unchanged american rhythm and sentence structure.

As expected, Voll Normal has been a smash hit in the german cinemas, with additional revenue coming in from TV rights and video rentals. Eichinger smiles and lights a cigarette. The first meeting scheduled for today is a young screen writer from Germany who has traveled to L.A. just to pitch an idea to Eichinger. Wieland explains to the german audience what a pitch is and adds that a flight from Frankfurt to L.A. currently costs around eight hundred Mark (one way!). The young lady is waiting in your office, Mister Eiking-her, says the secretary.

As they enter the room, Gudrun Schlecht turns around and stares at Eichinger and the film crew with enormous Shelley-Duval-eyes. While the crew is taking their positions, Eichinger congenially greets Schlecht by extending his enormous right arm. Schlecht hastily puts the cigarette in her mouth but still seems unsure which of her bony hands she should offer to the producer. Eichinger simply grabs both of them and gives Gudrun a vigorous shaking. He asks her if she minds the conversation being recorded – he has promised to the people from ARD that they can film a complete day in his life, nothing off-limits. Gudrun nods with a forced smile, showing two fingers of pale, almost whitish gums. Beneath her arms, her mint green and purple blouse is visible drenched in sweat. With the diametrical opposite of casualness, she hands Eichinger two closed envelopes she claims are letters of recommendation from Gisela Elsner and Karin Struck. Eichinger looks at the envelopes, but then puts them away unopened. He smiles and says: I don't care where you come from or who has send you, meine Liebe, all I care about is what you are gonna pitch to me today.

While Eichinger looks expectingly at Gudrun, the sound guy is balancing his boom mic just two inches over her head, just enough to keep them out of the shot, while the camera man is crouched on the floor right next to Gudrun's knee. The haggard-looking, almost six-and-a-half foot tall German tries desperately to find a way to sit comfortably in the way to low chair while avoiding to bump into the boom mic over her head and in her struggle displays a grotesque resemblance to Adam Sandler on the theatrical poster of Billy Madison.

GUDRUN PITCHES AN UNFILMABLE ADAPTATION OF A. CHEKHOV'S “A BORING STORY” (“Скучная история”), BUT DUE TO THE CAMERA CREW IN THE ROOM, BERND EICHINGER HAS TO FEIGN INTEREST.

GUDRUN RECEIVES A CHECK OVER $2000 AND IS PUT ON THE NEXT TRANSATLANTIC FLIGTH BACK TO GERMANY.

BERND MEETS WITH HELMUT DIETL IN A MALL WHERE YOU ARE NOT ALLOWED TO SMOKE. BERND AND HELMUT VISIT ANOTHER DIRECTOR AT THE SET. FOR THE BLOCKBUSTER HE IS CURRENTL FILMING, THE DIRECTOR HAS AN UNLITIMITED BUDGET: TO IMPROVE A TINY ASPECT OF A SMALL SCENE, A HYBRID BETWEEN STOP-MOTION AND GLASS BLOWING IS DEVELOPED FROM SCRATCH. THE TWO GERMANS FEEL OUT OF PLACE.

BACK IN THE PARKING LOT OF THE STUDIO, THEY REALIZE THAT EICHINGER'S MERCEDES BENZ HAS BEEN COMPLETELY CRUSHED BY A GIGANTIC TRUCK. AS A SIGN OF GOOD WILL, THE STUDIO OFFERS EICHINGER A BRAND NEW LANDROVER.

SHOOK AND CONFOUNDED BY THE AMERICAN WAY, EICHINGER AND DIETL QUICKLY REMOVE THEMSELVES FROM THE STUDIO LOT.

UPON RETURNING HOME, EICHINGER GETS STUCK WHEN ENTERING THE UNUSUALLY LOW GARAGE WITH HIS NEW LANDROVER.